The great naval Battle of Lepanto on October 7th 1571 pitted the entire forces of Christendom (the Holy League) against their formidable and determined enemy, the Turks. The victory at Lepanto is one of the most significant events in the Catholic Church’s 2000 year history. The Holy League, under the command of Philip II of Spain’s half brother, twenty two year old Don Juan of Austria, stopped their Eastern foe from overrunning Christian Europe.

In September 1571, Pope Pius V appealed to all of Christendom, but especially to the convents and religious houses around Rome, to double their prayers in order that the Holy League would be victorious. 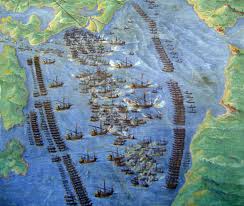 Map of the Battle of Lepanto 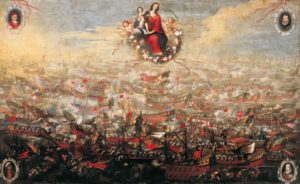 The pope gave every ship a small piece of the True Cross, and as the Armada put out to sea the Papal Nuncio blessed each ship as it sailed by. While they waited for the battle to begin, Don Juan heeded the pope’s suggestion and enforced a strict code-of-conduct on his men. No women were allowed on board; Don Juan and all his officers and crew fasted for three days; and every last one of his 81,000 men, (officers, crew and galley slaves) went to the nearby Jesuit College to go to confession and receive Holy Communion. Teams of Jesuits, Franciscans, Capuchins and Dominican priests worked around the clock for days to accomplish this mammoth task.

Immediately before the battle, Don Juan with a crucifix raised aloft, circled his fleet to offer a final sign of encouragement. His frigate sailed under the standard of Our Lady of Guadalupe and the Pope’s fleet sailed under the image of Christ Crucified. The Turk’s 286 galleys far outnumbered the Holy League’s 208, but many attribute the Catholic’s resounding victory to the behaviour of the men and the intercession of our Blessed Mother and Her Holy Rosary. The Turks lost 224 ships and 25,000 men, and 10,000 Christian slaves were freed.

Pope Pius was working in the Vatican when something drew him to the open window. As he looked out, he knew instantly that the battle was over and the Holy League had prevailed. To commemorate the greatest battle in the history of the Church, Pope Pius designated October 7th Feast of the Holy Rosary and Feast of Our Lady of Victory.

“It was not courage, not arms, not leaders, but Mary of the Rosary that made us victors” – Venetian Senators after the Battle of Lepanto.

In 1945 after WWII, Austria was occupied by 4 nations – Russia, Britain, France and the US. Post war conditions in Austria were fraught. Food was in short supply and the industries, especially in the mineral-rich area occupied by the Russians, were not being well managed. The Austrian people desperately wanted to regain their independence but how could a small country like Austria expel a Communist nation the size of Russia? 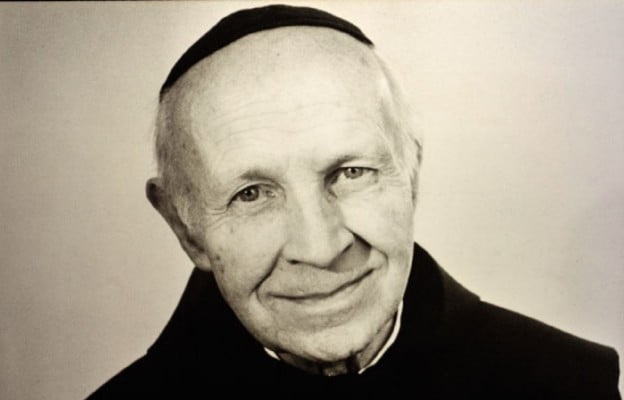 Fr. Petrus Pavlicek, a Capuchin priest, visited Mariazell, the main Marian shrine in Austria to seek Our Lady’s counsel. It was 2nd February, the Feast of Our Lady of Lights. As he prayed Fr. Petrus heard an inner voice say, “Do as I say and you will have peace.” Father remembered Lepanto and how the Rosary helped Christendom defeat the greatest enemy it had ever faced. In September 1948 Fr. Petrus began the ‘Crusade of Reparation of the Holy Rosary’ through the intercession of Our Lady of Fatima. The Rosary had three aims 1) the conversion of sinners; 2) peace in the world; 3) freedom for Austria. The Bishop of Leira Portugal helped Fr. Petrus secure a pilgrim statue of Our Lady of Fatima by the same artist who made the original pilgrim statue.

Fr. Petrus’ intention was to ‘storm Heaven as soldiers storm a fort,’ with Holy Mass and Rosary processions a central part of his plan. He was also deeply concerned about souls and spent literally days at a time in the confessional. Perhaps the most impressive part of Father’s plan was to get 10% of Austrians to pledge to pray the Holy Rosary every day. After a fairly slow start, more and more people joined in, including the Prime Minister Leopold Figl and members of his Cabinet. The Rosary processions, which were held each month on the 13th, became so huge it was decided to hold an annual one in Vienna on 12th September to commemorate the city’s famous victory over the Turks in 1682. Prime Minister Leopold Figl always led the annual procession.

Protracted peace negotiations (which included 260 meetings in London between the 4 occupying nations and a representative from Austria) never made much progress. However Our Lady is a faithful mother. On 13th May 1955, the 4 occupying countries finally agreed to withdraw from Austria and the agreement was signed 2 days later. The last Communist soldier left Austria on 26th October 1955 without a single shot being fired. Austria had achieved the unthinkable. When you consider that this was during the Cold War when Communist aggression and religious persecution were at their highest, it is even more miraculous and confirms it could never have happened without the intervention from Our Lady and Our Lord. Exactly one year later, on 13th May 1956, Austria held its first independent elections. 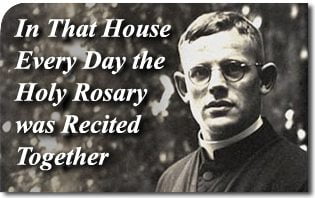 On 6th August 1945, a nuclear bomb was dropped on Hiroshima. Eight Jesuit priests living one mile from the epicentre of the bomb blast miraculously survived, while those around them perished. The men were examined by 200 scientists and doctors. Why did they survive? “We were living the message of Fatima. We prayed the Rosary every day.”

The Rosary Priest coined the phrase, ‘The family that prays together stays together.’

Father Peyton was born in County Mayo, Ireland in 1909. In 1938 he became desperately ill with TB and his sister urged him to consecrate himself totally to Our Lady and to devote himself to praying the Rosary. Miraculously he was healed. Father Peyton was ordained in 1941 and spent the rest of his life promoting the Rosary. During the 1950s and 1960s, a total of 30,000,000 people attended his Rosary rallies. At one rally in Manila, 2,000,000 people gathered to pray the Rosary. 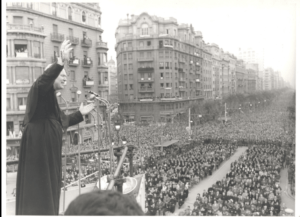 During this period, Brazil very nearly fell under the yoke of Communism. The universities were awash with communist propaganda and strikes were common causing widespread unrest and anarchy. A woman called Dona Amelia Bastos decided the future of the country was too important to leave to the men, so she established the Campaign of Women for Democracy. With the help of Archbishop Camara, Dona recruited women to pray the Rosary. On one particular day, 600,000 women prayed the Rosary in the streets of Sao Paulo for three hours, pleading with the Immaculate Heart of Mary to save Brazil. On April 1st, 1964 the communist government was defeated without one life being lost. Shortly after, the president fled the country.

Ted Bundy murdered 30-35, possibly even as many as 50 young women in the US. No one knows for sure. Many of his victims were university students from Florida. On one particular evening Bundy entered a student dormitory and killed two women. While on death-row, Bundy admitted to a priest that when he entered the room of the third student he had intended to kill her. However as Bundy entered the room he noticed that even though she was asleep she was clutching a Rosary. (The young woman’s grandmother had given it to her for protection and told her to pray the Rosary every night, even if she fell asleep while praying). As soon as Bundy saw the Rosary, he dropped his weapon and fled. He told the priest, some mysterious force protected the young woman and prevented him from entering the room. 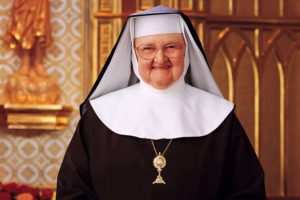